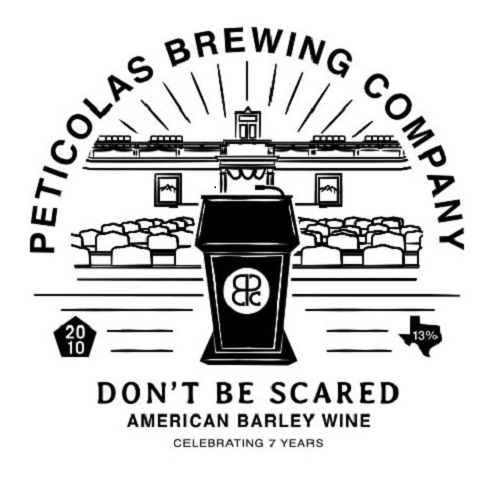 Don’t Be Scared epitomizes our approach to big beer and its relentless efforts to quash independently owned and distributed breweries. We remain defiant against such forces and embrace the opportunity to educate and publicly address beer industry inequities – all while keeping the production of world class beer priority one.

Our seven-year anniversary beer is a strong and aggressive American Barley Wine that stands for our brewery’s spirit and attitude – Don’t Be Scared. While you may have reservations towards confronting a 13% ABV beer with over 100 IBUs, don’t back down. Don’t be afraid. Our medium bodied barley wine pours with an orange-red hue and an off-white head. This beer’s aroma screams of pleasant citrus, pine and dark fruit, making it unabashedly approachable.

Transitioning from aroma to flavor is seamless as caramelized malt sweetness from a three-hour boil balances out massive amounts of Cascade and Chinook hops. Big citrus and cherry flavors come through towards the middle.  Don’t Be Scared finishes with clean bitterness alongside a touch of alcohol warmth that reminds you of its strength.

Let’s celebrate our past 7 years of our successes, failures, hits, misses, trials, and tribulations. The coming years will undoubtedly present many more challenges, but rest assured, this little local brewery won’t be scared.

Each guest will receive a commemorative 7th Anniversary glass with entry. We’ll have a one-off Anniversary shirt live printed from Pint Services available for purchase the day of the event only. Easy Slider and Tutta’s Pizza food trucks will be on site for the afternoon session. Holy Frijole food truck for the evening session. We’ll have DJ Big J spinning vinyl to keep the party going. We’ll have 200 tickets available for $40 each before the price increases to $45. Tickets are capped, and we have always sold out. Grab yours now and join us for guaranteed good times!