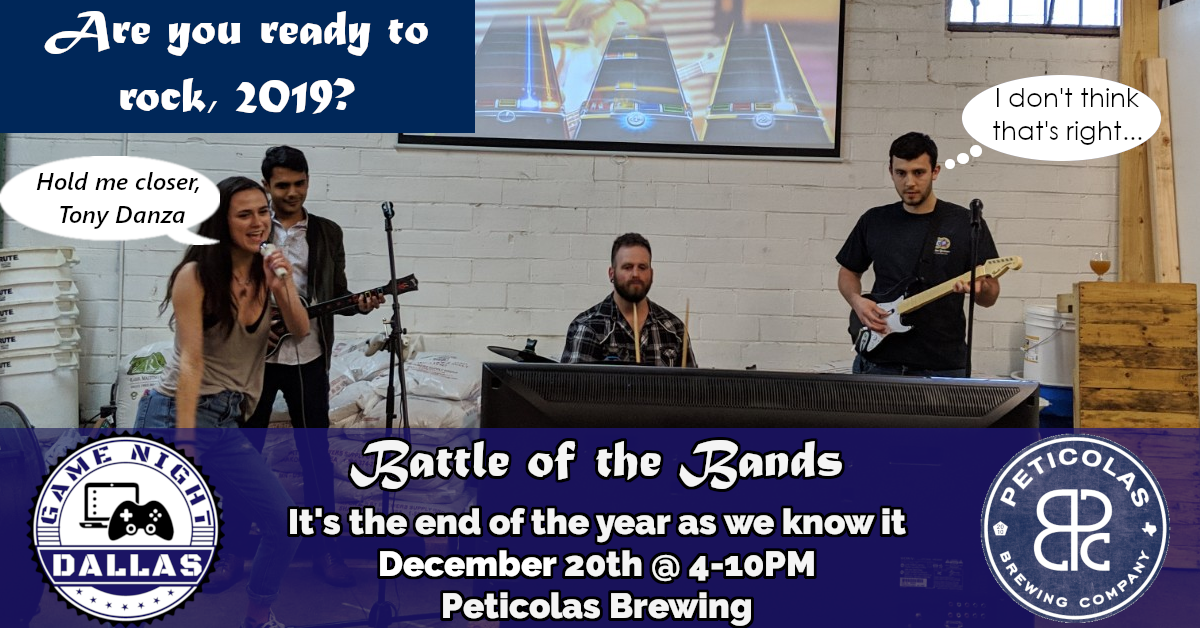 That being said, it’s time to go out with a bang. We’re hosting one final Battle of the (Rock) Bands tournament. This one is to determine which band will be the ultimate fake band for this year. Bring out your best friends, bandmates, co-workers, and even band-aids to help you in your battle to conquer the Rock Band stage at Peticolas.

We’re looking for up to 12 bands who think they’ve got the skills to be the best plastic guitar shredder, best fake drummer, best lead vocalist, and harmonist. Oh and I guess a bassist too. Your band has to fight their way through the rounds and pick your best songs to get the crowd’s support so you can claim the Rock Band crown.

We’ve got all the best equipment for you: Pro drum kit, microphones, and stands, functional plastic guitars. You just need to bring your stage presence, teamwork and maybe even costumes to help you win.

We will post the event schedule as we get closer to the event, but the main rounds will start at around 7PM. Peticolas’ doors open at 3 and we will be set up and ready to go for band practice at 4PM. Make sure to sign up your band over on Prekindle, and the best thing is that it’s free!

Prizes will also be announced later, but we will definitely have some sweet Peticolas and Game Night Dallas beer glasses to give away.

Tell your friends, mark your calendars and get ready to Rock!

Thanks again for an awesome 2019, and we’re excited about some new announcements for 2020.