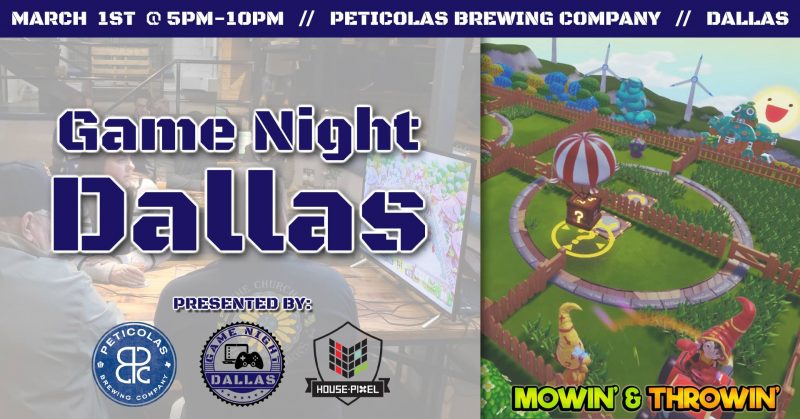 That’s right! House Pixel Games is back again with their new title Mowin & Throwin for some gnomish lawn care versus battles. Play 1v1 or 2v2 with your friends, neighbors or even parents to show off you lawn skills.

PC Games:
All your crowd favorites are back! Ultimate Chicken Horse, Starwhal, Super Bunny Man, BROforce, Gang Beasts, and much much more. Got a favorite PC game? Send us a message and we’ll work on adding it to the mix as well.

Trivia:
We’re still rocking out the Jackbox Games library with crowd favorites like Fibbage XL, Quiplash, Trivia Murder Party and more. Play along on your phone – we’ve even got phone chargers so you don’t have to worry about having enough juice for your Uber later.

Rock Band:
We’ve kicked up Rock Band a notch or 50 with custom songs. Now we have the ability to add almost any song to our Rock Band library that community Rock Band players have created. Got a favorite song you want to play? Comment below and we’ll try to get it added to our library – now with over 700 songs!

Starting at 8PM, we’ll have a Mowin’ & Throwin’ tournament, so get there early, sign up, practice and play for some cool prizes – beers, shirts, and gear.

See you guys there!