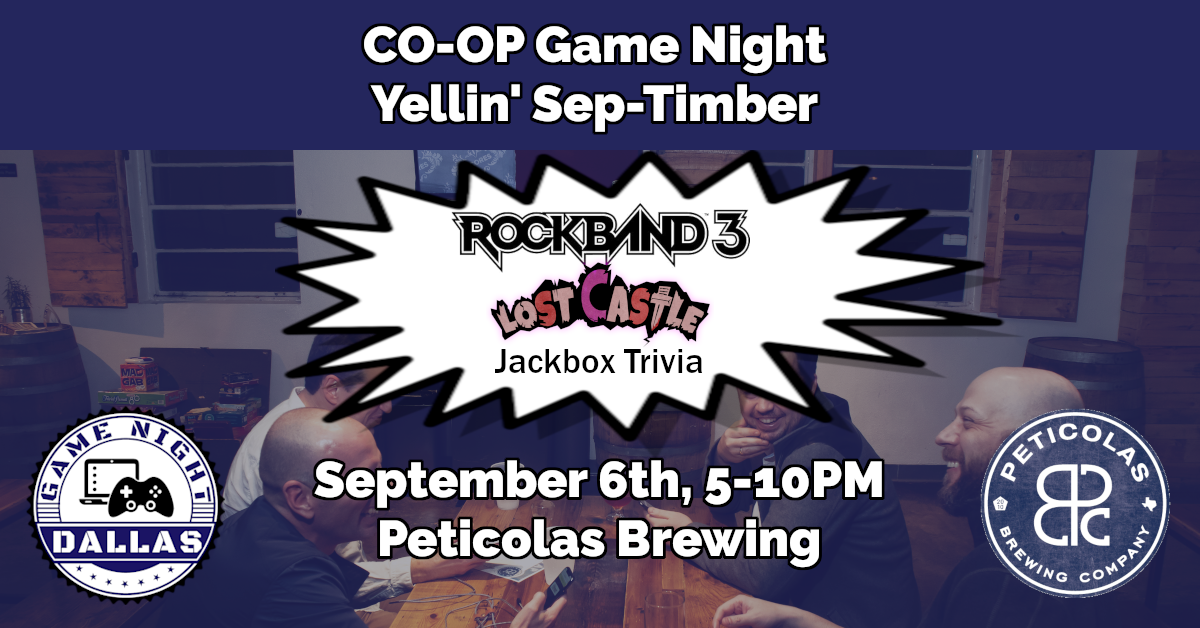 Yeah we’re back at it again after all of the Labor Day shenanigans and we’re having another Game Night at Peticolas with Game Night Dallas. That means Rock Band, Jackbox Trivia and all sorts of fun PC co-op games for everyone to play. So put down the exploding kittens and pick up a controller to play some co-op games.

Jackbox Trivia:
Fibbage, Quiplash and Trivia Murder Party are always bar favorites. We’re bringing those back and we’ll even throw in a curveball or two with many of the Jackbox Games Trivia offerings. Type in your lies, quips or trivia answers into your phones and compete against your fellow bar patrons for bragging rights, and even prizes and drinks as well! We’ve got phone chargers galore, so don’t worry about draining your battery. We’ll make sure you’ve got enough juice at the end of the night for your Uber ride.

PC Games:
Featured game this week: Lost Castle. This 4-player co-op game is a combination RPG/side-scrolling beat’em-up. It’s like the old NES game Double Dragon, but with swords, bows, and magic. You’re gonna die a lot, but that’s ok. You can power up your character after your inevitable death and go back at it again. You start out with a different random weapon every time, so jump back in and “git gud”.

Rock Band:
There’s no better way to practice your rocking skills, stage presence and off-key singing than to fire up Rock Band and live out all your rock fantasies. At least the ones that are appropriate in public. We’ve got over 700 songs in our Rock Band library, so you’re sure to find something to your taste. If we don’t have it, let us know and we can scour the internet for that missing tune. Got an expert drummer? We’ve got the real drum throne so you can bring out your inner Animal.

*Unfortunately, we don’t actually have Timber by Ke$ha in our Rock Band library. So we’ll try to have a suitable replacement.

We’re adding more prizes, beers and giveaways, so share with your friends and keep coming out to our Game Nights!